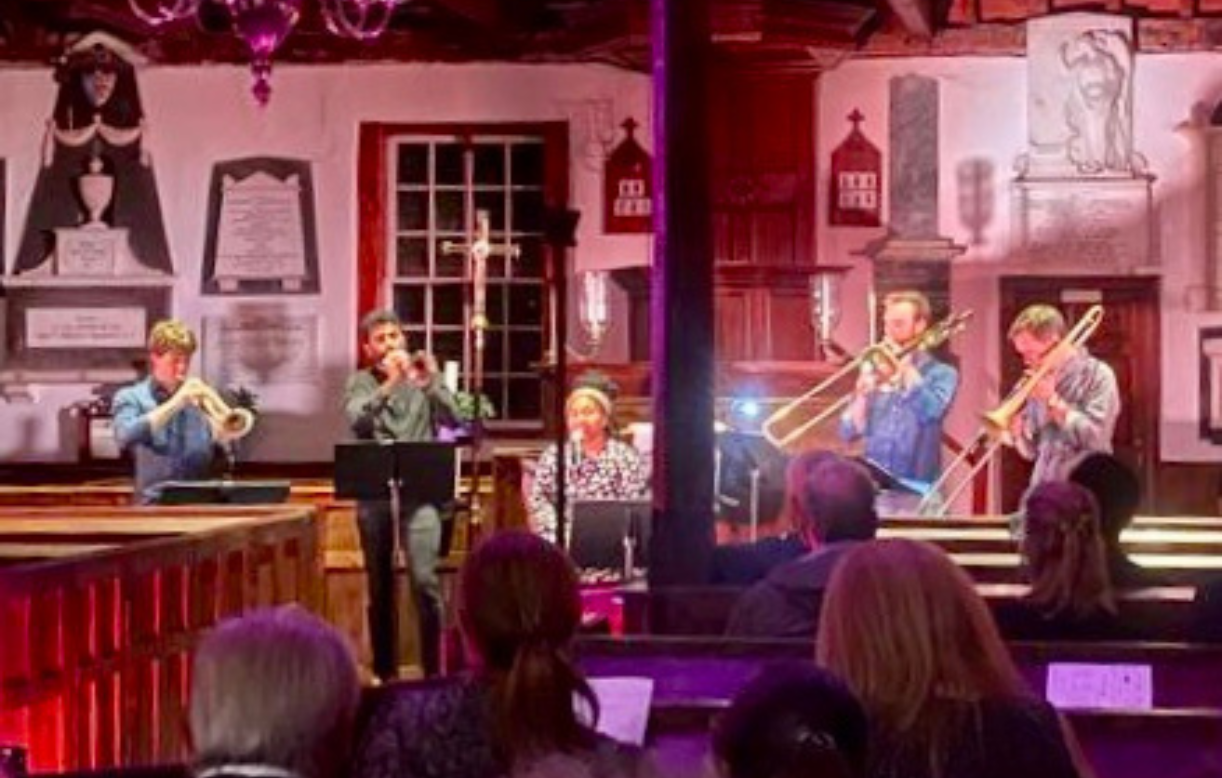 The Westerlies are a tightly knit team of four young master musicians.

Their two trombones and two trumpets gave us a richly diverse and emotive programme of music from multiple styles, locations and traditions.

St Peter’s Church was an inspired choice, the perfect venue for Thursday night’s concert, held under the umbrella of the Bermuda Festival.

The solid wall of Bermuda cedar behind the players helped to project and also to enrich their sound. Unobtrusive but powerful lighting lent a warm intimacy to the performance space including the ancient rafters above and the centuries-old monuments surrounding it. The musicians obviously felt at home here.

St Peter’s lent an ambience all of its own, as if the community worship from the past 400 years had somehow seeped into the structure. One almost felt that the church was a participant in the performance.

There is an intrinsic uniformity about the timbre and atmosphere generated by brass instruments which tends towards the liturgical and the spiritual and the programme reflected this by frequently returning to traditional folk, spiritual and church repertories. But interleaved between these the quartet gave us a number of their own and other contemporary compositions as well as some wonderful discoveries.

Trombonist Andy Clausen is co-founder of the group. His Robert Henry was a brilliant exercise in precision playing, with trombones putting down insistent rhythms under trumpet melodies before changing to heraldic fanfares leading to a blazingly fast finale.

Gospel numbers taken from the 1930s group The Golden Gate Quartet made for a fascinating and paradoxical musical experience. The Westerlies recreated five upbeat, joy-filled gospel performances of voices imitating a wind quartet. Remember Me, in particular, used all the blues wail techniques and sad bass legato slides to evoke a funeral atmosphere. I Was Born Ten Thousand Years Ago showcased Riley Mulherkar’s trumpet playing as the music accelerated to a march taken at an impossible, blurring speed.

We next had a surprise visit from Hana Bushara, a Bermudian singer/songwriter and winner of the 2019 Heather Nova Song contest. She and the Westerlies had met online during the pandemic and had decided to work together as the group was coming to Bermuda.

Hana sang two numbers: When The Ash Settles and Nadir. The first, a fun, fanciful ballad with an unusual trumpet accompaniment, was about the recently fallen Icarus being given a second chance in Bermuda. Hana has a clear and articulate voice well suited to the material and worked well with the trumpets.

The second song, a sad ballad on guitar, was not in my opinion a good choice to perform at this stage of the evening, which required something a bit more upbeat. The band reassembled and the concert finished with the audience invited to hum, drone-like, a single note, while the Westerlies played their All to Ourselves composition, strongly spiritual and reminiscent of Amazing Grace.