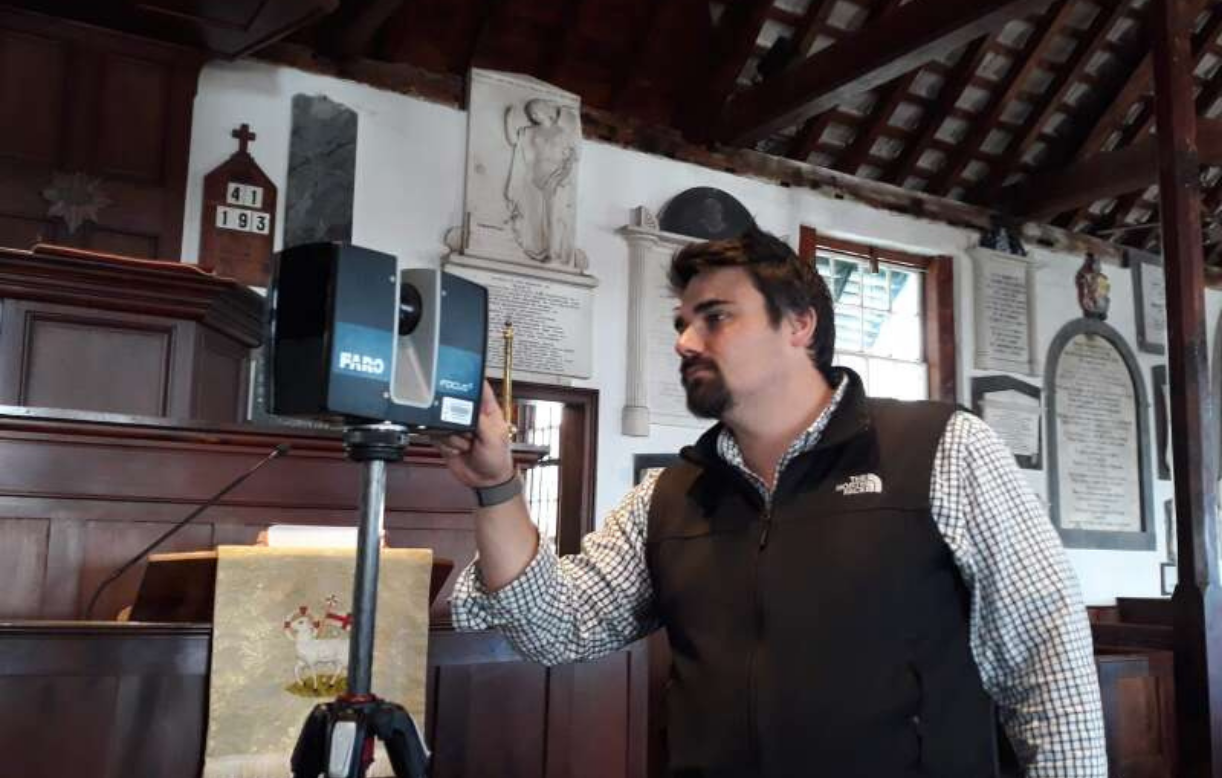 A team of university researchers are to use a high-tech laser scanner to map Bermuda’s oldest church, in partnership with the Bermuda National Trust.

Brent Fortenberry, an archaeologist from Texas A&M University, will use the technology to create a three-dimensional map of St Peter’s Anglican Church in St George.

St Peter’s is the oldest surviving Anglican church outside England and dates back to 1612 when it was founded by the Virginia Company.

It is the only Anglican church referred to as “Their Majesties Chappell”, a title found in a 1697 document discovered in 2007.

Dr Fortenberry, an associate director at the Centre for Heritage Conservation and an assistant professor of archaeology at Texas A&M University, said that a team of eight graduate students involved in the “applied learning” project would also create two-dimensional maps of the church to create the first complete map of its structure.

Dr Fortenberry explained: “The students are doing hand-measured plans of the building and then we’re using the laser scanner to do a 3D model on the inside and outside of the structure to create both 2D and 3D representations of the building.”

He added: “I’ve worked with St Peter’s now since 2008, doing historical research and archaeological research and, in all that time, we had never created a complete set of drawings for the buildings.”

The scanner uses a spinning mirror to shine millions of low-powered laser beams across an area.

The lasers measure the distance between the scanner and an object and the information collected is used to create a three-dimensional map.

Dr Fortenberry, who has done archaeological and conservation work across Bermuda, said that the models can show how the buildings and their use had evolved over the years.

He added that the information will be used to track changes in buildings and help with future repairs and conservation work.

Dr Fortenberry carried a similar survey last year where he mapped the Bridge House and State House, also in St George, as part of a new master’s degree programme at the university.

He said that its success of the Bridge House and State House project had resulted in a “tremendous” increase in interest and applications for the programme.

Dr Fortenberry added: “It’s an incredibly useful way to build their skill set. We’re not just in a classroom in Texas, we’re on-site with expertise building capacity in the community.”

Hayley Field, 25, said that she took part in last year’s work and had developed useful skills as a result.

She added: “It’s been great to see St George again and be able to contribute to the historic fabric and documentation of the town for a second time.

“St Peter’s is a really large building to document, so this year I feel like we had to collaborate a lot more as a group in order to get everything measured and to put all of our drawing together.”

Ms Field said that she planned to graduate in May with a master’s degree in architecture and wanted to work in archaeological preservation.

Gillian Outerbridge, the parish administrator, said: “Brent’s really a part of our family as he comes every year to work on the church.

“We’re very excited that he’s doing this special survey and I look forward to seeing the results.”