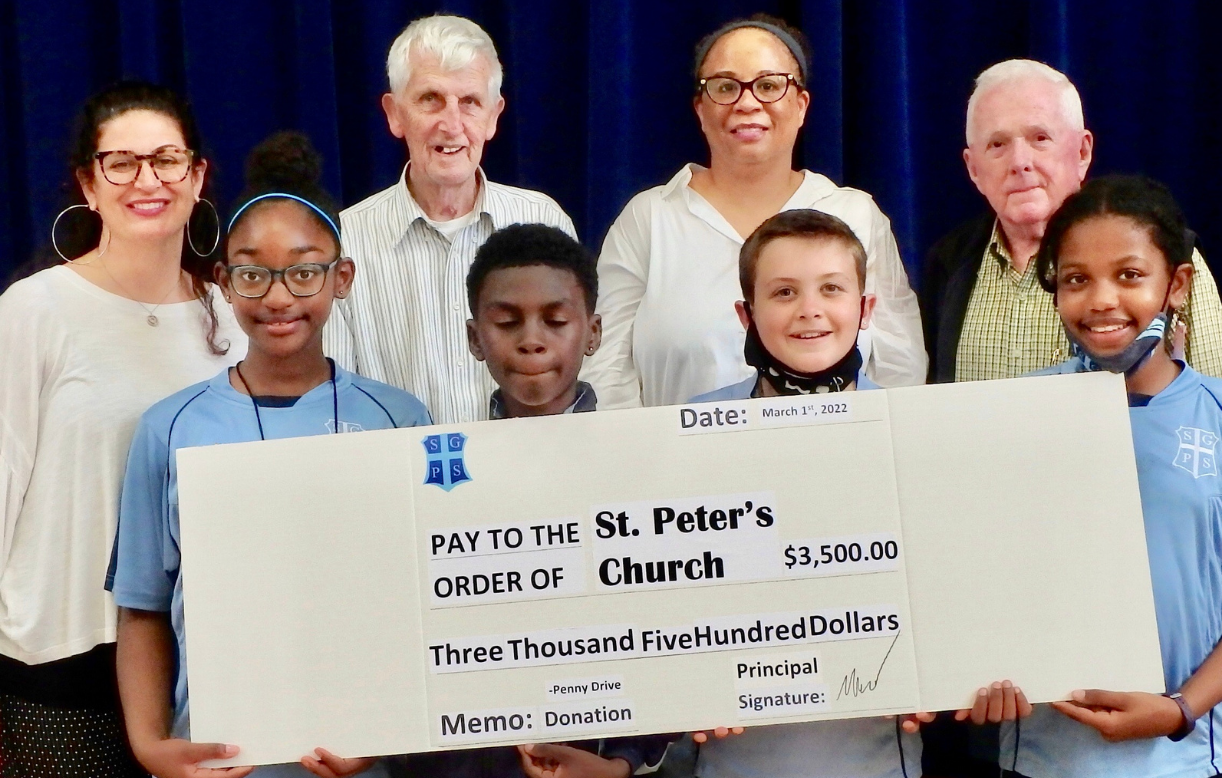 A few months ago Caleb Booth decided to save any money he got at Christmas and his birthday for a trip to the Big Apple to see his uncle.
He’d put aside about $30 when his school started a penny drive for the restoration of the 208-year-old clock at St Peter’s Church.
In a heartbeat, Caleb emptied his piggy bank.
“It was not hard,” the St George’s Preparatory student said. “I just donated all of it. It was for a good cause. It would be cool to see a 200-year-old clock fixed up and working again.”
Principal Gail Smith said Caleb, the school’s deputy head boy, did a bit more than donate money.
“He really spearheaded the campaign,” Ms Smith said, explaining how the 11-year-old went from class to class each week, encouraging students to bring in coins or paper bills to help to fill several Mason jars.

“All the children were excellent. They were really excited about it. They had great fun watching the money in the jars grow. And parents were super supportive. The children gave from their heart. They are so loving and so caring.”On the last day of February, each class counted up the money as part of a mathematics lesson.
“They made predictions on how much was in the jars,” Ms Smith said. “The littlest ones used it to learn tens. They put a circle around every ten coins. They had a wonderful time counting.”
Primary 6 students then counted everything again. The largest amount of money was donated by Primary 4 — $403.62.
Together, the school raised $966. St George’s Prep’s trustees, its Parent Teacher Association and Robertson’s Drugstore brought the final total to $3,500.
The penny drive was part of a year-long lesson about gratitude.
“We have a different theme every year. We spent the entire year focusing on how to show our appreciation and kindness,” said Ms Smith, explaining how the school had adopted Sylvia Richardson Care Facility and did something for the seniors there each month.
Before the pandemic, students would often visit St Peter’s, located only about a five-minute walk from their school.
On hearing last October that the church was at a “financial crisis point” owing to a decline in visitors and attendance, St George’s Prep decided to help it as well.
“Because it is a St George’s church and we are a St George’s school, it is near and dear to our hearts,” Ms Smith said. “It is a landmark the children are familiar with.”
Gillian Outerbridge, the church’s parish administrator, described it as “a wonderful, heart-warming concept”.
The money will go towards a $35,000 fundraiser to bring in a team from Thwaites & Reed in England to refurbish the clock, which sits on top of St Peter’s tower and is one of only a handful like it in the world still in operation.
The company claims to be one of the oldest clockmakers in the world with some of its clocks dating back to 1610.
Thwaites & Reed is famous for having maintained Big Ben in London for decades and for building the “Royal Clock” in the Queen Victoria Building in Sydney, Australia.
“They constantly go around the world working on their clocks,” Ms Outerbridge said.
The clock at St Peter’s was purchased by churchwarden John Till in Portsmouth, England and brought to Bermuda in 1814.
For several years it sat in storage while an electronic clock took its place. When that broke in 2009, the original clock was reinstated. However, it wasn’t in a good state having spent decades gathering dust.
The late Elizabeth Kitson and her family, descendants of John Till, donated $85,000 towards its refurbishment.
“Thwaites & Reed sent technicians to restore and rebuild the clock,” Ms Outerbridge said. “They found the clockworks intact and in good condition, with only a few parts missing, mainly the pendulum and weights, but these were replicated locally with the able assistance of Outerbridge’s Machine Shop and Meyer Steel.”
It only recently stopped working altogether. Regular maintenance had dropped off during the pandemic. And then a year ago, a strong winter storm blew the door off the clock tower.

“Dirt and silt were all around the top of the tower,” Ms Outerbridge said. “We had to reinstall the door and put in screening, and also cement wash the interior of the tower. So that was quite a lot of work that we got done at the beginning of last year.”
Now the plan is for the Thwaites & Reed team to return to buff it up again.
“They will take everything apart and oil it,” Ms Outerbridge said. “The face needs some attention. The gold leaf lettering and special blue paint on it needs refreshing.”
Once St George’s Prep had completed its drive, the problem became how to deliver the money.
“The jars were heavy,” Ms Smith said. “Some of them I could barely lift.”
In the end they poured all the coins into suitcases and wheeled them into the bank. The school presented a cheque to the charity Friends of St Peter’s Church this month.
“I thought that was awesome,” Ms Smith said of the decision to put the money towards the clock’s repairs. “Kids can understand that. It is more tangible than donating money towards bills.”
The clock does have some quirks. It chimes 12pm at 12pm and then again at 1pm.
“Visitors are mystified,” Ms Outerbridge said. “But the locals like that and we are not fixing that.”
For more information see www.stpeters.bm/friends. Also see St George’s Preparatory School on Instagram @st.georgesprepschool.