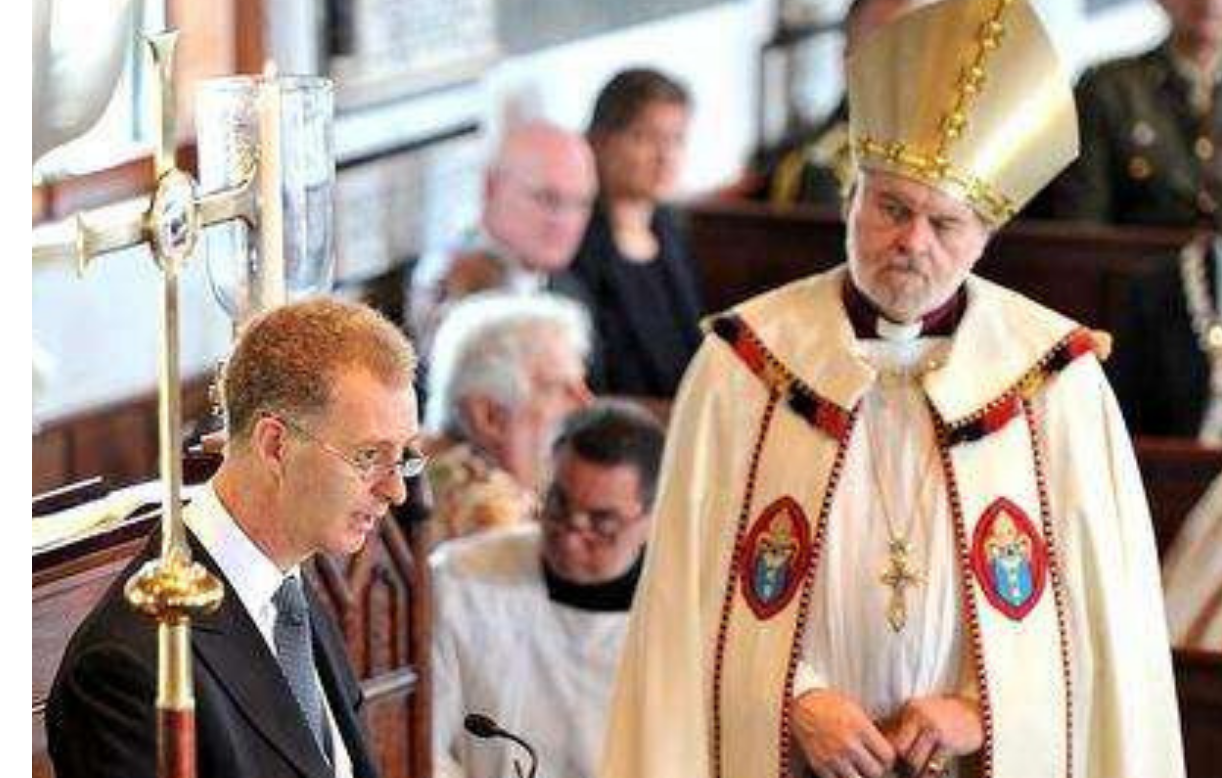 The Bishop of London Richard Chartres, currently in Bermuda at Queen Elizabeth II’s request, delivered a letter from the Queen to Governor George Fergusson while at St Peter’s Their Majesties Chappell yesterday morning for a special service celebrating his visit.

The Bishop told the congregation that his visit was overdue, as Bermuda’s Anglican Church was overseen by the Bishop of London for the first 200 years of settlement, but neither he nor any of his predecessors had made the trip in their official capacity until now. “I felt I couldn’t resist the invitation to make belated amends,” he said during his sermon.

The service at the St George’s church, which is Bermuda’s first church and dates back to 1612, included Mr Fergusson’s reading of the Queen’s letter, which said: “I would like to extend my warmest greetings and wishes to you and the people of Bermuda in this special year, which marks both my Diamond Jubilee and the 400th anniversary of the Anglican Church of Bermuda.

“I am very glad to be able to contribute to your celebrations by reviving the historical designation of the Church of St Peter founded in 1612 as “Their Majesties Chappell”. The visit of the Bishop of London as the Dean of Chapels Royal underlies the continuing significance of the link between the Church and the Crown in the unfolding story of Bermuda.

“I am most grateful for the continuing support and loyalty of the people of Bermuda, who have always welcomed me so warmly during my visits to the islands. I hope that this year’s commemorative events, in which you have played such a significant part, will be memorable for years to come.” The letter is signed Elizabeth R.

The service, which was attended by dignitaries including the Governor, Premier Paula Cox, Mayor of St George’s Kenneth Bascome, St George’s MP Dame Jennifer Smith, as well as many other politicians and church hierarchy, included a guard of honour for the Bishop consisting of the Bermuda Sea Cadets and a fanfare played by Bermuda Regiment trumpeters. St George’s and St David’s Sunday School children sang ‘All things bright and beautiful’ which included some special words by choir mistress Dianne Green referencing Bermuda, including “The cedar trees for birds nests, the fields where we can play, the rain that brings us water, to nourish every day.”

A chalice dating back to 1625, called The St George’s Chalice, and a silver communion set given to St Peter’s by King William III and also dating back to the 1600s was processed around the church to allow the congregation a close look. The silver communion set is of special relevance because it was given to the Church by King William III, after the death of his wife Queen Mary. ‘Their Majesties Chappell’ refers to William and Mary.

The Bishop’s sermon focused on the concept of love, and he encouraged the congregation to realise that they can choose to love their neighbours, and to love themselves “for God’s sake … because of how wonderfully we are made, and He gave us life in all its fullness.” He spoke against “self laceration”, and called it “self-absorption … I’m astonished how often there is terrible self-denigration. Christian loving is not like that at all — it’s quite different,” he said.

Speaking after the service was finished, he said it was “Better late than never” to be in Bermuda. “The Bishop of London was in charge for 200 years and they were never able to visit. I am the first to come while in office, and mainly because of Their Majesties Chappell.

“I am here at the Queen’s request to celebrate the church’s new status.”