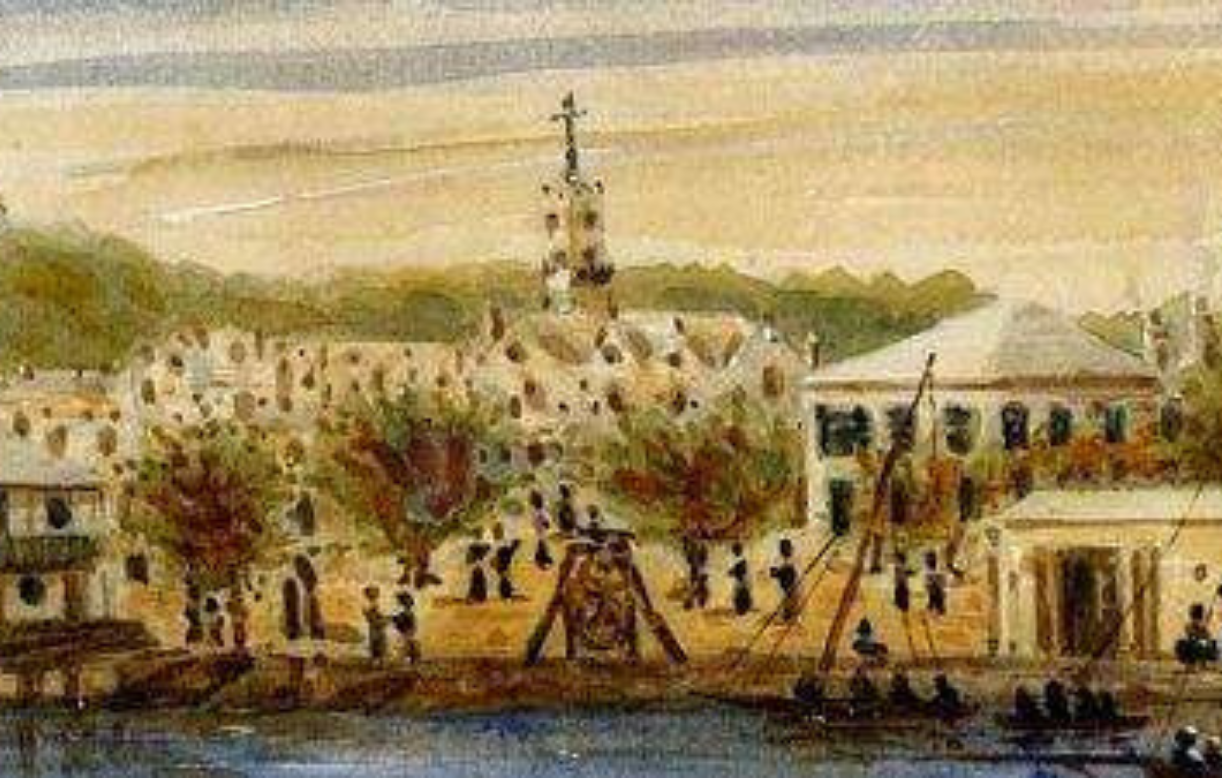 On July 11, 1612, Bermuda’s first Governor, Richard Moore, and the island’s first permanent human settlers entered the easternmost harbour of the archipelago on the

Plough, some weeks out of England. Moore was not an appointee of the English monarch, but rather of the board of directors of the Virginia Company, a corporation of shareholders of the City of London. Following his mandate from the firm, which became the Bermuda Company in 1615, the Governor set about establishing a town on the northern edge of the harbour, an urban site that later was named St George’s, perhaps for the late Admiral Sir George Somers, but certainly for the saint of that name. Saint George was a military man in the service of Diocletian and died a Christian martyr two years before the end of that Roman emperor’s rule in AD 303. He is one of the most venerated saints in the Anglican, Catholic and Eastern and Oriental Orthodox churches, and is most famously represented by his slaying of a dragon, though from whence came such a dinosaur in the time of the 51st Emperor of Rome is unclear. Saint George is the patron saint of many entities in the Old World and in the country of Georgia, a precise 365 Orthodox churches are named for him, symbolising the myth that when he fell in battle, his earthly remains were so numerically divided and sent throughout the country. Bermuda has, it sometimes seems, an equal number of churches, but of saints none is apparently to be found. After consulting the bible of Bermuda place-names, that wonderful book by Daniel Blagg, illustrated by Luca Gasperi, the ‘Bermuda Atlas & Gazetteer’, confusion reigns, for Blagg notes that the town was named after the patron saint of England, but that ‘an ancient account put it,

In that very place which we now call St George’s towne, this noble Knight died, whereof the place taketh the name’. So ‘Sir’ became mingled with ‘Saint’, but none of that mattered to Cromwell during the Commonwealth (16491660), for the politically correct names became ‘George’s Town’ and ‘George’s Island’. No matter, in the middle of July 1612, Governor Moore established what has proved to be the second English town, but the oldest continually inhabited one, in the Americas. As seen in the Joell map of 1780, now in the Massachusetts Historic Society, the centre of the town came to be its church, which was consecrated as St Peter’s Church in April 1826 by the first bishop to come to Bermuda, the Rt Rev John Inglis, the Bishop of Nova Scotia and, as of 1825, Bermuda and Newfoundland. As the oldest Anglican church outside the British Isles, in this year of its 400th anniversary it now has been granted an additional honour by Her Majesty the Queen, celebrating her Diamond Jubilee this year, the title ‘Their Majesties Chappell’, a term first used in the 1690s during the reign of King William and Queen Mary. The formal bestowing of that title occurred in a special service, an intituling service, at St Peter’s on Sunday, March 18, 2012. According to the doyen of dictionaries, the ‘Oxford English’, an ‘intituling’, or ‘intitulation’, means, ‘the action of bestowing a title’. The early reference to that title was found in the warrant from King William III’s Chamberlain to the ‘Master of His Majesties Jewell house’ for a set of communion silver to be made for the Governor of Bermuda ‘for ye use of Their Majesties Chappell there’, as requested by the Bishop of London in a letter which seems to have been written while William and Mary were reigning jointly, before her much lamented death in 1694. The communion ware, a collection that bears the Royal Cypher of William III, was crafted by Frances Gawthorn of London in Britannia Standard Silver (purer than sterling and decreed by law for plate silver in 1696) and delivered to Governor Samuel Dey in 1697. It consisted of ‘Two little Flaggons one Challice a Petten and a Receiver to take the offrings’. The Chalice is the Communion Cup and the Flagons, in fact quite large, held the wine, the Paten is a serving dish for the bread offered in remembrance of Christ, while the Receiver was what is now called the Collection Plate, wherein one placed a donation for the church during a service. Bermuda is indebted to Dr Thomas Sinsteden of Connecticut, who found the 1697 Warrant for the set of Britannia plate in the National Archives, London and brought a copy of it to St. Peter’s in 2007 and placed it on the desk of the Incumbent, Father Raths. While one hesitates to say ‘like the Saint’, the fact is that Rev W. David Raths, CD, BA, BD came to Bermuda in June 2005 from 30 years of service in the Canadian Forces, entering first as a piper, as in Scottish bagpipes and leaving, may one say, as a piper for the Lord. It has been Bermuda’s good fortune to have had such a person to lead the charge to recover some of the history of St Peter’s, for perhaps a civilian might have missed the boat. Father Raths was aware of the special of the William III communion set, as he knew about a similar set at ‘Her Majesty’s Royal Chapel of the Mohawks’, a church which is at one the oldest standing building in Ontario, a National Historic Site of Canada, and one of only six Chapels Royal outside of Great Britain. The significance of the 1697 Warrant was not lost on the good Reverend and he set about to find out what had been intended by the use of the words ‘Their Majesties Chappell’ and whether an intended significance had been lost over the centuries. The quest ultimately involved the Governor of Bermuda, Sir Richard Gozney KCMG, CVO, the Archbishop of Canterbury, the Most Rev and Rt Hon Dr Rowan Douglas Williams, and the Serjeant of the Vestry, David Baldwin RVM, the holder of an ancient office responsible for many matters related to the Chapels Royal. To much excitement at St George’s in late July 2011, His Excellency the Governor, transmitted word received from Buckingham Palace from Edward Young, Deputy Private Secretary to the Queen that ‘I am pleased to report that The Queen is content for the title “Their Majesties Chappell” to be redesignated to St Peter’s Church, in honour of its 400th Anniversary’. Three hundred and fifteen years have passed since the Warrant of William III was written, but it is fitting that “Their Majesties Chappell” has been confirmed as a Royal Title by Queen Elizabeth II in 2012 to mark the 400 years of the existence of the Church in the Town of St George. Congratulations are due to all who helped to accomplish the “intituling” of St Peter’s, the oldest Anglican church in the Americas.