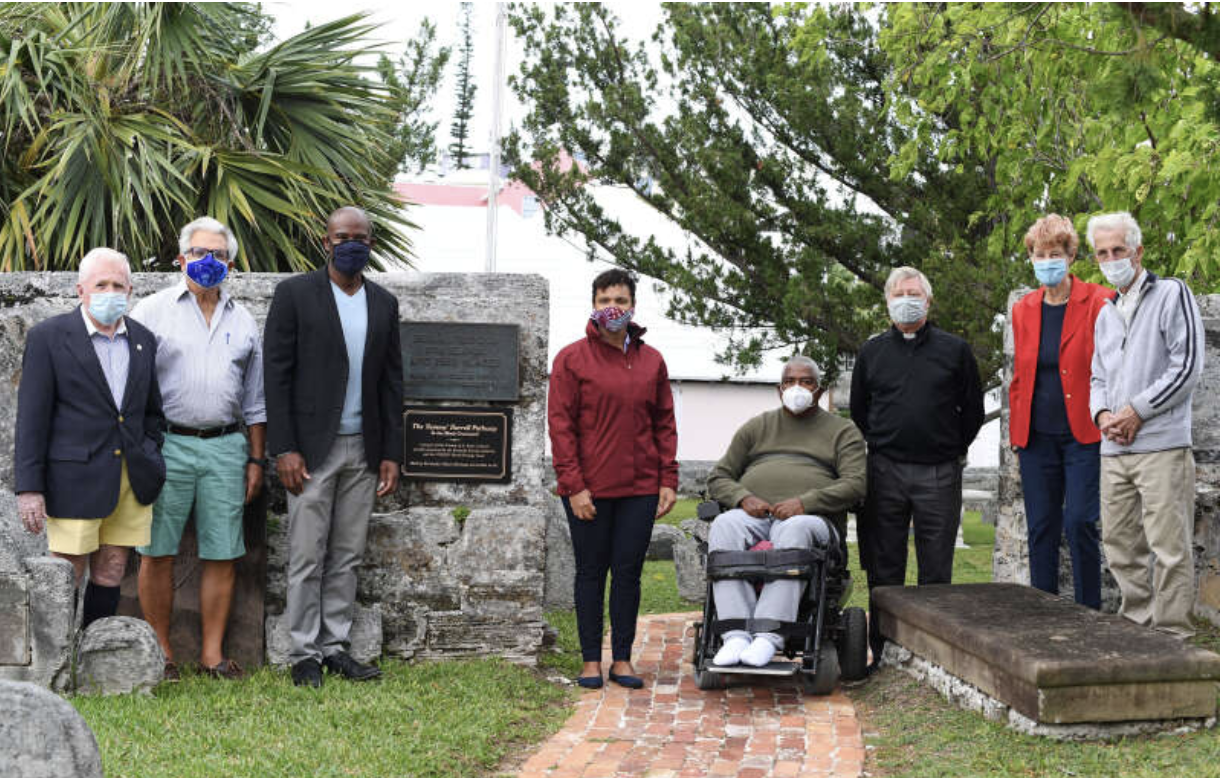 Access to a historic black cemetery in the Town of St George has been improved as part of a collaborative effort between multiple organisations.

A new pathway into the slave and free black portion of St Peter’s cemetery was officially unveiled yesterday and named in honour of barrier-breaking black ship pilot James “Jemmy” Darrell.

A spokeswoman for the Friends of St Peter’s Church said the group proposed the pathway to make it easier for those with physical impairments to visit the historic site.

She said: “In April every year we have the Jemmy Darrell commemoration service and there are a lot of seniors who come, but climbing up the bank was a challenge for them.

“Given the importance of black heritage in Bermuda, it’s important that we have accessibility for everybody. It also makes it much more visible.”

A Bermuda Tourism Authority spokeswoman added: “Together with the Unesco World Heritage Fund, the BTA supported the Friends of St Peter’s by sponsoring the construction of the pathway and purchase of a commemorative bronze plaque now erected at the graveyard’s entrance.”

Glenn Jones, interim CEO of the BTA, said there has been an increased focus on accessibility within the body.

He said: “We are really grateful for the people here at St Peter’s Church who were already on the road to improve accessibility even before we began to engage with them.

“Once we learned of it, we wanted to make sure we were offering our support as well.”

He added: “A big part of our National Tourism Plan is to make Bermuda into an experience for everyone, no matter who you are, and I think that has been accomplished here – really a very important site on the African Diaspora Heritage Trail, and we hope it means more people will get to experience it now.”

Mr Jones added that the BTA is also focused on improving “soft skills” to help frontline tourism workers understand the challenges of travelling with a disability.

He said: “We are going to have training in that regard to start in January to help take care of that part of the issue.”

Keith Simmons, accessibility officer at the Ministry of Health’s Ageing and Disability Services, added the ministry was working closely with the BTA to improve accessibility across the island.

Candy-Lee Foggo, town manager with the Corporation of St George, said the municipality was pleased to be able to support the initiative through the Unesco World Heritage Fund.

She added accessibility in the town was “very important”, but was often challenging to implement because of the town’s age.

Ms Foggo said: “There are limited mechanisms that can be used to improve accessibility, but whenever we are able to do it, we will embrace it.”

Mr Darrell was born into enslavement in 1749.

He was later freed and became one of the first black King’s Pilots.

Tinee Furbert, the Minister of Social Development and Seniors, said: “The new Jemmy Darrell Pathway acknowledges how we can change the racial and disability inequalities that exist in Bermuda.

“To walk a trail that is now accessible and one that has such historical value will be a true experience of breaking chains.

“It is an inclusive step in the right direction.

“I applaud the collaboration of the Friends of St Peter’s Church, the Bermuda Tourism Authority and the Unesco World Heritage Fund for making Bermuda’s black heritage accessible to all.”

The St Peter’s graveyard for slaves and free blacks was established on the western side of the church’s property sometime in the late 1600s and remained in use until the graveyard closed in 1854.