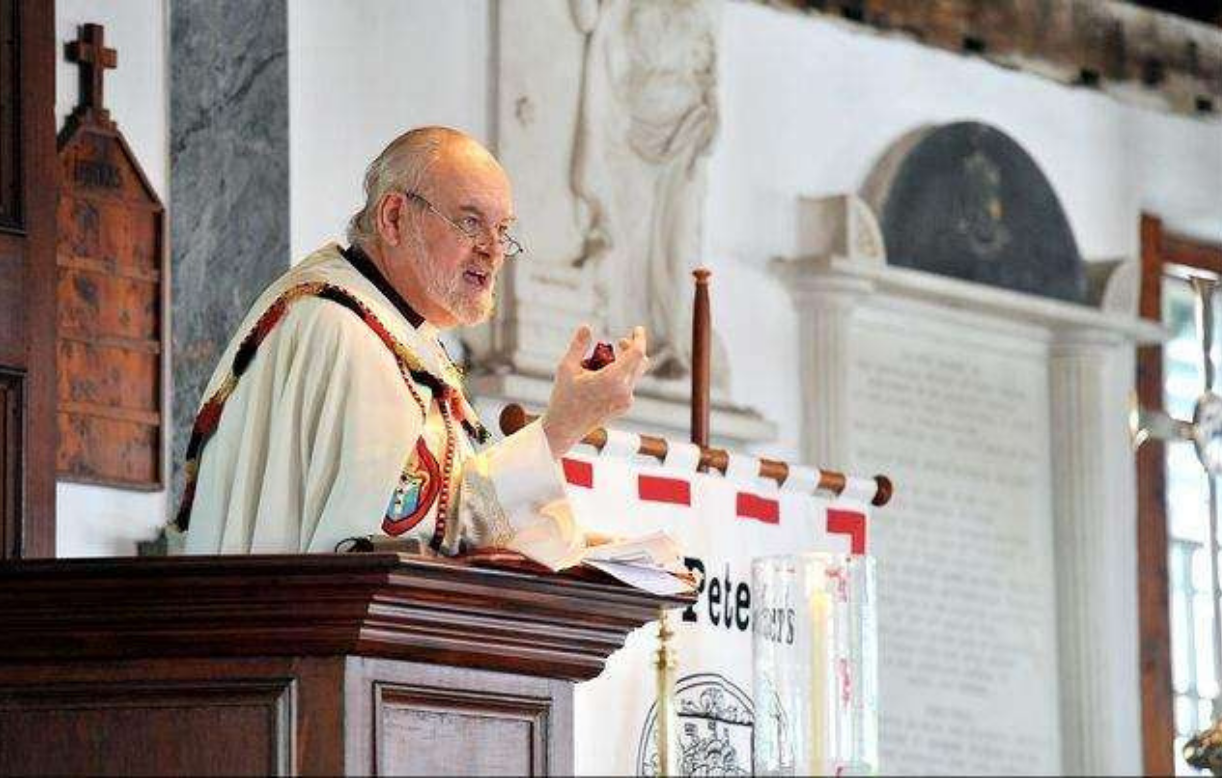 The Bishop of London, the Rt Rev Richard Chartres, was on the Island this weekend to celebrate the 400th anniversary of the founding of St Peter’s Church.

The church is possibly the oldest continually used Protestant church in the Western hemisphere, and believed to be the oldest surviving Anglican church outside of the British Isles.

“It is an extraordinary beginning, because, of course, in 1612, there weren’t any other churches at all established this side of the Atlantic,” said the Bishop of the church’s founding that year. “It’s a very significant step in what has become a worldwide fellowship of Christians.”

Although ordained as a deacon in 1973, a life of ministry and service to the church may have seemed a strange thought for the Rt Rev Chartres as a child.

“I wasn’t brought up in a family that went to church. It would have been much more interesting had they been actively hostile, but they weren’t.

“They were indifferent, like, perhaps, the majority of English people.”

He began questioning life, largely because his brother was “severely mentally handicapped”.

“The question that kept on coming back to me was, ‘What’s it all about, if he’s disqualified from the word go, from all that makes life worth living for others, the glittering prizes?’.”

That question had a great impact on his life and ministry, beginning with his confirmation in the church while a university student.

“I think you live your way into the answers of the most important questions. The questions change, and there are some things that are so significant you can only live into them.

“You can’t actually treat religion as just a language game where you move the pieces around and make them all consistent and coherent.

“You have to live with a certain disposition towards life, you have to discover whether that disposition is fruitful and life-giving, or whether it is negative.”

As Bishop of London, the Rt Rev Chartres is considered to be the third-highest ranking official within the Church of England.

He was purported by the media to have been a strong contender to take over the post as Archbishop of Canterbury, when it was vacated by Rowan Williams earlier this year. Despite that he was never a candidate, he insisted.

“I’m too old, so there is no question of that. In fact I tried to make that absolutely clear by putting myself up for election for the body that chooses the next Archbishop.”

He was elected to that body but unable to participate in the selection process due to scheduling conflicts.

However, he is delighted with the Bishop of Durham Justin Welby’s appointment to the post.

“He’s got the gifts, he’s got the energy and he’s got the time to effect the very profound changes in the central life of the Church of England, which is overdue.”

He believes that the church has been ensnared by the media.

“I think there is no doubt about the place of the church in local communities.

“But of course, nationally, people think that we are on the most wacky agenda, constantly worried about sexuality and all sorts of other matters, which is a fiction.”

Contrary to what has been reported, the Bishop is not against the ordination of women nor is he against gays in the church.

“I’ve appointed women archdeacons and I have done as much as can possibly be done to open the ministry of the church to women.”

He continued: “I am absolutely clear that one of the building bricks of a sane society is the institution of marriage which is a faithful lifelong union between a man and a woman which provides an optimal, though not infallible, context for bringing up the next generation.

“That does not mean one goes around condemning and excoriating other people.

“And this is one of the troubles that we’re up against: the binaries — you are either one thing or the other thing, you are either pro it or against it.

“There doesn’t seem to be any room for anybody who tries, however inadequately, to be wise about these things and to live it.

“A person’s relationship to Jesus Christ is much more significant. I’ve got some marvellous priests who are homosexual in orientation who work very hard, are very loving, and are icons of Jesus Christ.

“So I think that, again, it’s very unhelpful to try to mince and atomise society, and set people against one another.”

The visit was the Bishop’s first to the Island. While here he also hosted a lecture honouring Canon Thomas Nisbett for 50 years of service.

He said of his time here: “I’ve received the most wonderful welcome. It’s an Island of great beauty.

“I’m not blind to the challenges that Bermudians face in these economic times, but it’s a society now which has existed for 400 years, and I hope it will continue to flourish for the next 400, at least.”