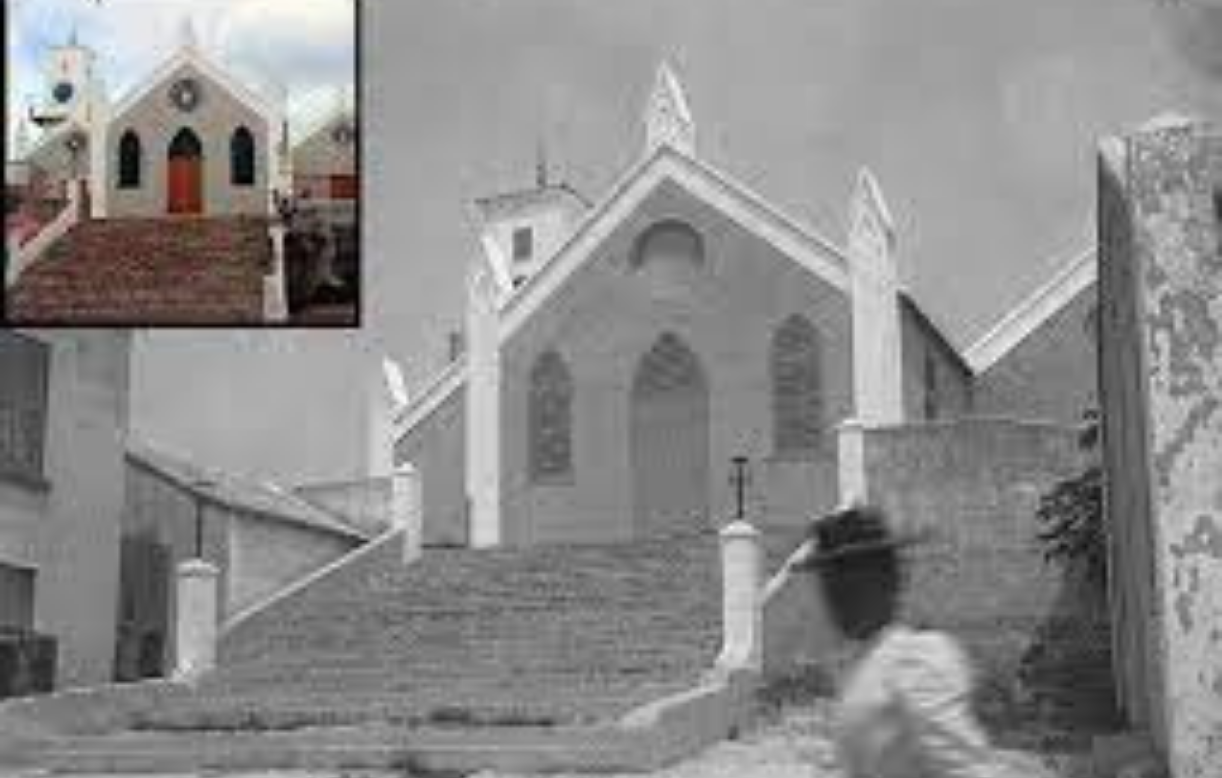 HERITAGE MATTERS by Dr. Edward Harris ‘As its 400th anniversary approaches, St. Peter’s Church is in a good state of repair, thanks to the 1950—53 restoration. The exterior reflects early Victorian Gothic taste, but the interior houses an array of 17th and 18th century features. — Bermuda National Trust, Bermuda’s Architectural Heritage: St. George’s, 1998.

It has been said in a number of ways that ‘time and tide wait for no man’. It is an inescapable fact that time (which does not exist) marches on, or rather it is we who march inexorably to the date on which we will need the services of St. Peter’s Church and its twin, the Church Yard, as we cross the River Styx from the lands of the living to the landscapes of the eternal afterlife. While it is nothing that you can see, taste, hear or smell, time can be measured, with some difficulty, based upon the coming and going of the day, though not on the ebb and flow of the tide. From the moment one is born, the stopwatch, or more appropriately, the timer, starts its countdown: a life of Lincoln’s ‘four score and seven years’ is but a mere 31,775 days long, tossing in 22 days that distinguish the ‘leap years’ from the ‘common years’.

Thus in the grand scheme of a time-full universe, we are but 189,930 days removed from the last days of the primeval inhabitants of the Bahamas, when the egg timer of their extinction was set on 14 October 1492. Timers were soon set for the extinguishing of many small and large cultures of indigenous peoples throughout the Americas. It should perhaps be a source of amazement (and abiding sadness) that so much heritage has been trashed in such a short period, that is within the last 520 years of the existence of modern homo sapiens.

Bermuda hove into the historical time-stream in 1505, some 185,182 days back and has only been truly settled for 146,056 days, or four lifetimes of those fortunate, or otherwise, to make it to a full five score years, hopefully steeped in honour. While we have put in a goodly number of days of destruction these last 400 years, we have not a few points of goodliness and one, the church in St. George’s dedicated to St. Peter the Apostle in 1826, stands out as one of our better achievements. In fact, St. Peter’s is now blessed as international heritage, due to its inclusion in Bermuda’s ‘World Heritage Site’, so designated by UNESCO twelve years ago, at the beginning of the new millennium.

What began as ‘ Church of Palmitoe leaves’ is now a substantial edifice in the centre of the of St. George’s and was central to the life of the town for over three centuries, until the modern proliferation of other religious bodies, Christian and otherwise. The loss of the capital status of St. George’s in the late 1700s and the rise of the City of Hamilton after 1815 also meant that the cathedral of the Anglican, or State, Church was located in the latter place, a building increasing obscured by the houses of Mammon. However, that evolution saved St. Peter’s from physical destruction, as did the abandonment in the late 1800s by the Vestry of the ‘Unfinished Church’, now a picturesque ruin on the hillside to the northeast of St. George’s.

Thus St. Peter’s, like its namesake saint, can claim a few firsts as the oldest continuous Anglican congregation in the Americas, regarding its people, and with regard to its heritage, it is the oldest site in this hemisphere that has been used continuously for such a church building. These are but two very good reasons for the celebration of the 400 years of St. Peter’s Church, aside from the significance of its graveyard and its construction in traditional Bermuda materials and building methods.

Additionally, as lately celebrated in an Intituling Ceremony, the presence of a fine set of silver communion service implements, given by the monarch William III, has allowed the Church to reclaim its 1697 title as ‘Their Majesties Chappell’, an honour bestowed up St. Peter’s by Her Majesty Elizabeth II by a proclamation illustrated herewith.

The building of the Church had something of a chequered career in its early years, with the first structure, erected by Governor Richard Moore early in 1613 in timber with a palmetto ‘thatched’ roof, collapsing in a gale within a year or so, due to position on an ‘over-bleak site. This may have been where the church now stands, but its replacement was completed about 1619 and was timbered and probably plastered, ‘resembling the English Elizabethan half-timbered houses, familiar to the settlers’. However, a great hurricano struck Bermuda in 1712 and sent that 95-year old edifice the way of its predecessor. It is a pity, of course, that no such Elizabethan structures have survived in Bermuda, the other notable one being Governor Tucker’s home in Southampton, “The Grange”, on the rich Overplus lands.

Lessons were learned and the new church was fabricated in Bermuda stone after the hurricane. In 1815, the parish church of St. George’s was considerable expanded and Major John Till purchased a clock for the tower, which stills counts the hours over the graveyard and the town. Another hurricane damaged St. Peter’s in 1830 and the 1841 renovation was ‘the last stylistic alteration to the church …[which] has not changed essentially in the last 150 years’, by 1998 that was.

Enter, however, the archaeologists from the Bermuda National Trust and Boston University under the direction of World Heritage Officer, Richard Lowry and Dr. Brent Fortenberry, and new chapters are being added to the history of the venerable St. Peter’s Church, as it enters its fifth century, with the discovery of structural evidence under its floors and artefact recoveries, such as the coffin plate found with the remains of Governor George James Bruere (orbit 10 September 1780). Enter also the formation of the ‘Friends of St. Peter’s’, the coming of the energetic shepherd, the Rev. David Raths, an expanded corps of volunteers and donors, and all augurs well for the survival of our first church for its next 146,100 days, that is to say, hopefully, into the Year of Our Lord 2412.

Tomorrow at 11am a special Service of Thanksgiving for the Diamond Jubilee of Her Majesty The Queen will take place at St Peter’s, followed by the planting by His Excellency the Governor, the Hon. George Fergusson, of a special Bermuda tree and an elegant Jubilee Garden Party in the churchyard, with music by the Band of the Bermuda Regiment.

Edward Cecil Harris, MBE, JP, PHD, FSA is Executive Director of the National Museum at Dockyard. Comments may be made to director@bmm.bm or 704-5480.